For several years, SPOC has made use of a machine to cut control wire. Since we build all our products to order, high-volume throughout has resulted in efficiency gains, enabling us to deliver drives faster than anyone else in industry. With this machine we’ve been able to control length, cut straight, and reduce wiring errors and potential arc hazards.

Naturally, with such savings in time and money and improvements in safety, we wondered whether we could reap the same benefits for our power cable.

SPOC made the quarter-million-dollar investment in heavy-duty cable cutting, stripping and labeling machine, and found that the answer was an emphatic yes.

Here’s how we knew: Soon after we took delivery of our new wire machine, SPOC’s industrial engineer performed a time study. Our team built three high horsepower active front-end drives and clocked 127 hours for two technicians to cut and strip cable for the three panels. Then we built three identical panels using the new cable-cutting machine. The results were astounding. One technician performed the work of two, and in only 35 minutes total.

The machine is amazing not only in terms of efficiency but also simplicity. First, the technician selects the appropriate cable and carts the spool to the cutting machine. He enters new parameters or selects a preset recipe based on drive frame size, product rating and product type. The recipes include cable diameter and desired length, lengths to be stripped on each end, whether the cut pieces will be solder-dipped and lugged, size of the lug, and what text should be printed for the ink jet label. With just a few pre-programmed recipes, technicians can quickly start work on a large percentage of the jobs.

In the past, since the cable is covered with a thick neoprene jacket, workers used razor knives and a lot of pressure to slice through the outer coating. As they struggled to make the cuts, there was always the risk of personal injury – and now that risk is eliminated.

As techs used large cable cutters (much like yard loops) to slice each power cable, it was extremely difficult to make smooth, continuous cuts. Often the ends were uneven with irregular angles.

Since the high-flex cables house thousands of tiny individual strands, it was nearly impossible to slice the heavy cable and not damage the filaments inside. And once the cable was cut, the pressure of the outer sheathing often caused the copper filaments to bend and fray, possibly causing hot spots and reducing reliability. If the cable end started to fray, the associated lug would not fit. And when that wire was installed in a terminal block, if even one wire is stranded, it could cause an arc flash.

With SPOC’s new automation, not only is each piece cut with precision but the tip of the jacket is left on each cable length. When the machine cuts the wire, it pulls the jacket a couple of millimeters so the wire remains wrapped in a spiral inside the jacketed material. When an installer is ready to terminate in a piece of equipment, he simply removes the tip and all the filaments are intact. In the field, this means less chance of short circuits from frayed cable ends.

In the shop, it means that power cable can be cut and stored intact with no risk of degraded quality. Pre-cut cable makes our production process even faster.

Automation has also sped the task of labeling lengths of cable, by printing information the operator types into the machine. Now, when a component is installed or replaced, all its wires are clearly marked — reducing chances of improper or unsafe wiring in the field. Safety is our first concern, for SPOC employees in the manufacturing and testing process and for our end users. 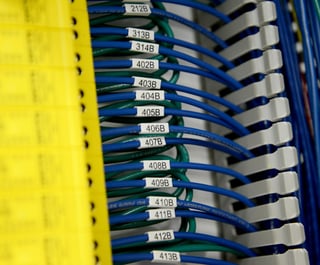 Along with improved safety and savings in production time, the machine has meant savings in materials. In the past, when cuts were made by hand, technicians would cut extra length to ensure each piece would be long enough for the job. Extra cable scraps were discarded as waste, tossed in recycling drums. At a cost of $5 to $20 per foot, that wasted cable was a costly expense. Now that waste is eliminated.

SPOC is one of the first companies to invest in a machine to cut power cable, and it’s been proven to be the right thing to do. It’s one more way SPOC Automation remains the industry’s fastest provider of consistently high-quality equipment.