Maybe the world can be divided into two kinds of people: those who patch problems and those who create solutions. If that’s the case, the people at SPOC Automation fall squarely in the second category.

Take for example, the age-old problem of drives overheating in NEMA 3R outdoor enclosures. We know that heat is a killer with electronics, and the brutal environmental conditions in oilfields make heat a particular problem. Drives burn up, production is stopped, and thousands of dollars are wasted.

One solution? Years ago, the solution was to add muffin fans on the enclosure door along with pressed metal louvers to either let air in/blow it out or else blow air in/purge it out (applying either positive or negative pressure).

For all this effort, drives still overheated -- until SPOC stepped in.

Rather than continue to patch the problem by fixing or replacing the drives, SPOC went to the source of the problem to re-engineer the enclosures. We looked at the box from “outside the box” and introduced a new game-changing design. 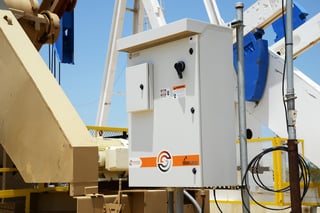 To expel heat and increase airflow in and out of the enclosure, we recessed the drive into an air plenum and moved the power section of the drive to the back, behind a false sub pan. With this innovative design, we drew air into the enclosure through the air plenum and expelled air through a sunshield.

We even did thermal testing and research on paint colors beyond the typical ANSI grey standard and found that white paint offered 22-25 percent better thermal protection.

SPOC’s design was revolutionary in a number of ways--the false sub pan, the exhaust system built in to the enclosure, the cooling from the sun shield, and the white paint all added up to a 25 percent cooler enclosure, even in the harshest conditions.

We’re proud of the fact that our integrated design not only replaced the obsolete muffin fan “fix,” but that it soon became the industry standard for NEMA 3R drives.

If imitation is the sincerest form of flattery, then we’re flattered indeed that the “SPOC box” is demanded by customers, far and wide.

Want to talk about innovations for your artificial lift applications? Give us a call today.